Here is a list of documentations (press release, patents...) about the the project:

BESTMEMS project (ANR ANR−15−CE22−0015−01 and MOST 105−2923−E−002−006−MY 3) is a French-Taiwanese international collaborative research project (PRCI) aiming at experimental development and co-funded by Agence National de la Recherche (ANR), France and Ministry of Science and Technology (MOST), Taïwan. The project is coordinated by Mickaël LALLART, LGEF INSA-Lyon (French side) and Wen-Jong WU, NTU (Taiwanese side). The consortium includes academic labs LGEF INSA-Lyon (FR), College of Engineering NTU (TW), LTDS ECL (FR), NTHU (TW), as well as industrial partners SKF-Aerospace (FR) and SIMTRANS Technology Inc. (TW). The project started on February 2016 and lasted 42 months. It has been granted an ANR funding of 313k€ and MOST funding of 220 k€, for a total cost of 1219 k€ (882 k€ (FR) and 337 k€ (TW)). 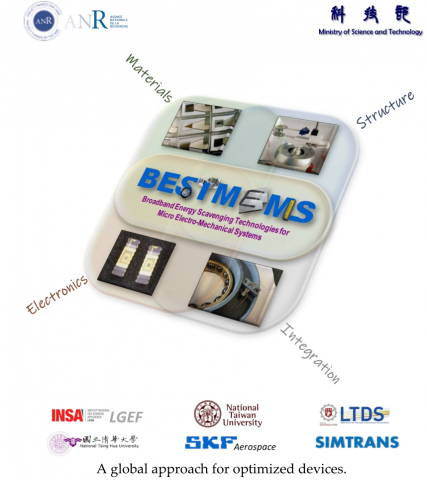 BESTMEMS is a French-Taiwanese international collaborative research project (PRCI) involving ANR on the French side and MOST on the Taiwanese side. The project objectives lies in proposing self-powered (i.e., using ambient energy sources converted into electricity) sensors for applications in transportation. The project origin lies in the dramatic increase of autonomous sensor networks in the framework of Internet of Things (IoT) development for instance. Furthermore, in that context, some applications cannot be supplied by conventional chemical batteries, mainly due to their self-discharge. This particularly applies in confined environments and/or when the surroundings feature relatively severe environments. Both of these conditions can be found in numerous transportation-targeting devices, such as Tyre Pressure Monitoring Systems (TPMS) or smart bearings that cannot be easily supplied by wires (due to rotating parts) and are difficult to replace while experiencing relatively high temperatures that dramatically increase primary batteries’ self-discharge (for example, TPMS lifespan is typically four years, which is well below the lifespan of the tyre itself). Hence, the use of energy harvesting technologies, able to convert ambient energy sources (more particularly vibrations in the considered cases) into electricity is a promising solution to address this power supply issue.

In addition to this energy challenge, BESTMEMS features an innovative approach that consists in considering all of the fields involved in energy harvesting and self-powered system, from the material elaboration and characterization to the microelectronic integration, encompassing structural design and electronic and power conditioning aspect, along with the interfaces between all of these disciplines. In that sense, the global and transdisciplinary approach taken in the framework of BESTMEMS is disruptive and allows the design of globally optimized devices, rather than the combination of independently optimized blocks (yielding sub-optimized global system).

All along the project, BESTMEMS permitted first-class scientific advances in each involved fields (micro-transducer elaboration with outstanding conversion abilities, innovative structures for rotational energy harvesting, high-power output integrated electrical interface…) as well as significant knowledge gain in their interfacing for a global optimization.

Challenges and problematic, state of the art

For the sake of security and comfort for instance, related or not to regulations, an unprecedent demand and associated market demand have risen in terms of sensing, especially in the transportation industry (Figure 1; [1]). While most of the associated devices may use directly available power lines, a non-negligible part cannot have access to wires due to locations that are difficult to access (e.g., rotating parts). In that case, the use of secondary energy source are necessary. While conventional solutions rely on conventional chemical batteries, the latter feature severe limitations in terms of lifespan, especially due to their current leakage (where energy is lost without being actually used), which leads to reliability issues for devices that are in confined locations. 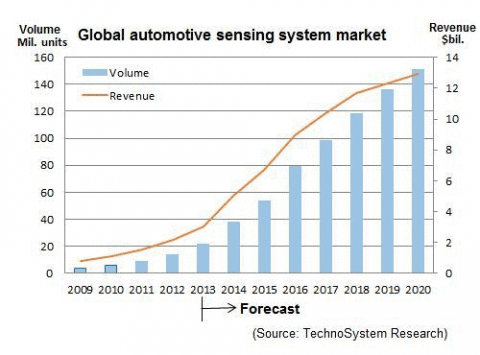 Over the last two decades, using transducers for converting energy from the surrounding sources (thermal, vibrations…), namely “Energy Harvesting”, has become an attractive solution to address conventional batteries’ issues, with power output densities in the range of a few mW.cm-3 ([2). Many efforts have been done in that direction on material ([3), structural ([4) and electrical ([5]) aspects to enhance the energy that can be converted. However, very few investigations have been considered the whole system, which yields a sub-optimized global self-powered device.

Hence, the challenges behind BESTMEMS lie in two levels, the first one being the advances in each respective fields (highly coupled material at a reduced scale, efficient structure that let energy entering on a wide frequency band, efficient electronic interface able to output high power, energy-efficient yet reliable and precise sensor), while the second one aim at ensuring good and optimized interfacing between each of these fields, yielding multiscale purposes that are truly innovative.

The multiphysic sensitivity of each partner, along with its own expertise in each project domain, allows a smooth and global approach, ensuring common understandings of challenges in each involved aspects as well as a common language allowing easy and efficient scientific communication. In particular, while each discipline will benefit from cutting-edge advances, the latter are obtained in tight link with the requirements and needs of the other considered fields. For example, material design have been strongly guided by the minimal requirements in terms of capacitance value and voltage levels for a good interfacing with the electrical extraction circuit. Globally speaking, the project is definitely application-driven (TPMS and smart bearings), with numerous bidirectional interactions all along the developments and interactions between partners (Figure 2).

As an application-oriented project, BESTMEMS allowed to obtain efficient yet realistic materials and systems thanks to the scientific advances brought by the project not only in each considered fields, but also at their interfaces. Based on specifications and requirements, stating for example a minimal required mean power of for the global microgenerator (material+structure+electrical interfaces) of ~100 µW, with peak instantaneous power up to tens of milliWatts (D1.1, D1.2).

Based on these considerations, the material process and elaboration was optimized (D2.1, D2.2), along with the transducer structures (rectangular or triangular shape… D3.1, D3.2) along with considerations about the structural and electrical interfacing (for example capacitance > 4nF, voltage level >1.5V peak). Elaborated transducers therefore show power output up to 300 µW at 0.5g of acceleration (700µW @1g) and peak-to-peak open circuit voltage of more than 30V at 0.5 g (Figure 3 - D3.3, D7.1), along with a good fatigue resistance for accelerations up to 1.5g (D4.1). 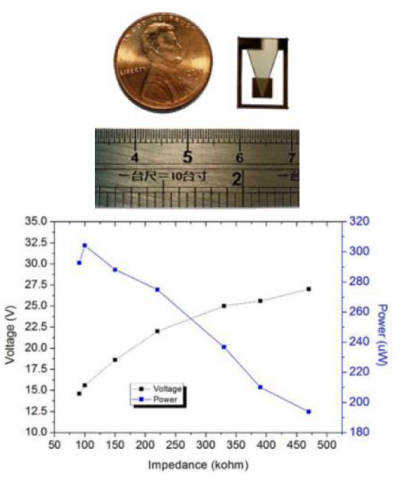 Simultaneously and taking into account the material properties, proper models of the transducers were developed, validated and exploited (D4.2, D4.3, D7.1). More particularly, intrinsic and/or external nonlinearities were taken into advantage in order to ensure significant harvesting energy on a wide frequency range based for instance on low-cost orbit jump through transient, energy-efficient, electromechanical stiffness modulation (Figure 4). Also, cutting-edge studies, still under considerations, aimed at taking advantage of the rotational motions, and more particularly tangential acceleration (centrifuge effect) for either triggering an oscillatory behavior (similar to electronic oscillators powered by a constant voltage) based on electromechanical stiffness modulation, or through a tuning of the nonlinearity to match the harmonic excitation due to the change in local direction of the gravitational force. 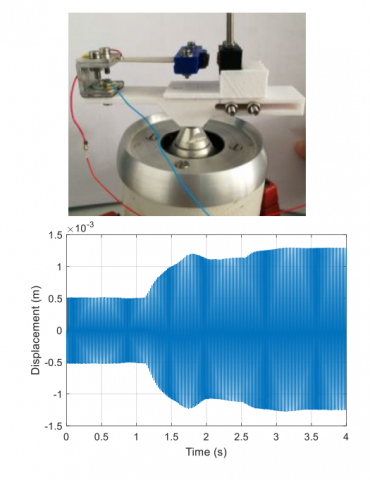 The third step was the consideration of the electrical energy extraction interfaces based on the transducer and electromechanical structures’ characteristics and performance (D5.1, D5.3, D5.4), as well as integration constraints (D5.2). In that sense, particular nonlinear approaches, for instance based on the control of the trade-off between remaining converted energy (obtained by a voltage magnification through voltage inversion process) and energy extraction (Figure 5), or considering the replacement of inductances by a secondary piezoelectric element for integration purposes (Figure 6) have been developed to further enhance the microgenerator output power, showing output power gain up to 600% compared to conventional approaches (D5.5, D7.2). 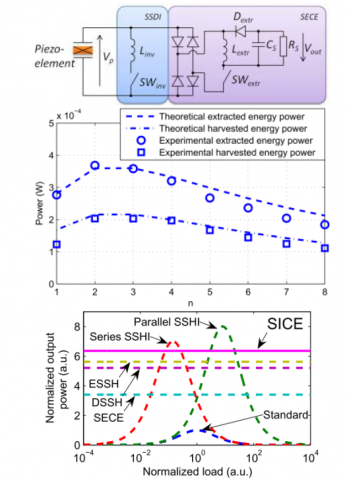 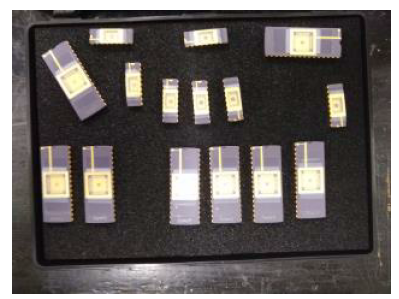 Finally, in order to combine selected advanced and achievements and associated the obtained microgenerator with the off-the-shelf developed sensing unit (D6.2, D6.3, D6.4) incorporating optimized and custom-defined proper and ultralow-power sensing strategy (D6.1, D7.3), dedicated testbenches (one for each application - Figure 7) have been developed. This permitted validating the globally-designed devices developed in the framework of the entire project (D7.4, D7.5).

Results have been the subject of numerous scientific communications, totalizing 9 international, peer-reviewed journal papers and 19 scientific conference communications (including 18 international conferences and 3 invited talks), on each area encompassed by the project, as listed in Table 1. Furthermore, although not totally completed at the end of the project, BESTMEMS allowed to develop demonstrators of self-powered TPMS and smart bearings that could potentially be valorized through patenting with the help of the industrial partners.

Also, BESTMEMS had numerous outcomes in terms of collaborations thanks to the knowledge gained on global aspects for energy harvesting. Thus, new collaborative projects have been set between partners, namely:

Other benefits gained from the visibility offered by the project was the participation of one or several partners to projects managed by institutions out of BESTMEMS consortium:

Globally speaking, BESTMEMS has been one of the very first project emphasizing the need of global approaches for the design of efficient multiphysic devices. As demonstrated by the previous section, this had for example positive outcomes in the scientific (academic and industrial) community, reaching higher levels as demonstrated by the European H2020 ENHANCE MSC ITN project, in which one of the BESTMEMS partner is currently involved.

Apart from this significant influence in the way to address self-powered systems, BESTMEMS has also been ahead of a number of scientific topics that are currently emerging and with high potential development. As an example, state-of-the art of the project in terms of rotational energy harvesting initially considered externally fixed piezoelectric structures, which are now more and more designed to be directly integrated within the rotating device itself, which was envisioned (and in the process of completion) since the first year of the project.

While being still at relatively low TRL (level 4), BESTMEMS permitted a significant progress in many scientific fields’ maturity, some of them having started at TRL2/3 at the beginning of the project. The disruptive transdisciplinary and global approach of BESTMEMS, that is now at the end of the project more and more developing in the scientific and technical communities, has also permitted significant achievement on many aspects (material, structure, electrical interfaces…)